Rise of the Guardians | Film Review

“Darkness! That’s the first thing I remember. It was dark, it was cold and I was scared. Then I saw the moon. It was bright and it chased the darkness away. I wasn’t scared anymore”… These captivating opening lines transport the audience straight into the depths of the adventure created by this wonderful computer generated animation, based on the original stories from the book series.

All around the world lights are going out because children have stopped believing! ‘Pitch’, the Boogey Man (voice of Jude Law), is threatening children’s innocence, bringing fear to their hopes and dreams. With the aid of his dark horses, Pitch is turning “Sandy’s (the Sandman) gold dust into nightmares. Pitch wants to be believed in like the other Guardians and is determined to establish a power base for his own devices, “If enough children stop believing, there will be nothing but fear, terror and me!”

The Man in the Moon appoints Jack Frost (‘Jack’, voice of Chris Pine) to assist the Guardians in restoring faith before the light goes out.  The ever-faithful Guardians ‘North’ (Santa Claus, voice of Alec Bladwin), ‘Bunny’ (Easter Bunny, voice of Hugh Jackman), Tooth (Tooth Fairy, voice of Emma Stone) and ‘Sandy’ (Sandman) gather from all around the world to shine light on Pitch’s plan.

Jack Frost has a big job on his hands. Children see only what they believe in and in order to rise to the status of Guardian and be seen, Jack must firstly believe in himself, know who he is and why he was chosen. Tooth assures Jack, “We are all someone before we are chosen as a Guardian” and leads him on his quest, “Teeth hold childhood memories. Fairies watch over them and when children need to know, we help them remember”.

Jack takes on the challenge of discovering who he truly is by facing the shadows in his path. Pitch is not giving up without a fight and tries to seduce Jack, “All these years in the shadows, I know what it’s like to not be believed in”. “All this fuss about one little boy! Oh well, there’s more than one way to snuff out a light”.

It only takes one child believing, to keep the light shining and that child is a little boy called Jamie. Once he faces his fears, he tells Pitch, “I do believe in you, I’m just not scared of you”. Pitch’s fears eventually turn in on himself. Light, faith and hope are restored.

Children’s movies speak to us on many levels all at once through myth and legend and remind us that there is a hero within each and every one.

Some of my favourite lines from this movie:

“Guardians watch over the children, keep them safe and bring home their hopes and dreams.” (North)

“That which you give no power, has no power over you.” (Jack)

“Do you stop believing in the sun when the moon comes up? We will always be here in your heart and that kinda makes you a guardian too Jamie” (Jack)

North awards Jack with the honorary title of Guardian, “Will you Jack Frost, vow to watch over the children of the world, to guard them with their hopes, their wishes and their dreams? For they are all that we are, all that we have and all that we will ever be”.

I have seen this movie four times and are highly likely to see it again! 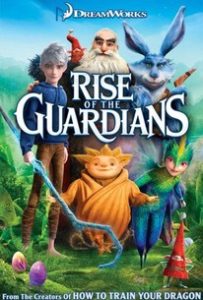