This 3D animated movie tells the tale of ‘The Croods’, a family surviving the uncertainties of existence through the unwavering protection of their father, Grug (voice by Nicholas Cage). Until now, that is! Now that the daughter, Eep (voice by Emma Stone) has reached her rebellious teenage years, she challenges that which has gone before, as children are designed to do!

Grug does his best to persuade the rest of the family to reject Eep’s outlandish sense of ‘curiosity’, depicting his concerns through cave paintings, fear of the unknown and traditional use of storytelling to engage, educate, inspire and sustain unity.

The world as ‘The Croods’ have known it is coming to an end and Eep’s character reflects this, in that she is born without the tail of her predecessors. Eep’s innate ‘curiosity’ has her meet a young boy from the New World who brings with him some new and exciting discoveries, which magnifies Eep’s cu

riosity and desire. Natural disaster necessitates the family’s need to journey forth. 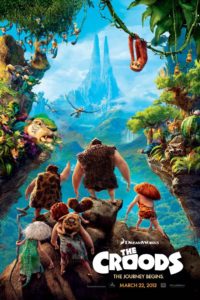 Grug is naturally challenged by the boy from the New World, Guy (voice by Ryan Reynolds) and their interactions pave the way of the future. Grug is forced

to find value in his own true nature and in doing so, renews the family’s destiny.

One of my favourite lines is from a story telling session by Guy, “When she goes to the edge, she sees, hears and feels more”. ‘The Croods’ imparts many gems to my enquiring mind, including the ancestral tendency to hold on to what is tried and tested in order to survival and ensure safety; the natural instincts of a father to care for and protect his family; the power of danger to propel us forward and the power of children to disrupt the status quo, providing impetus to propel us all forward.

This adventure story speaks to the spirit of the child within us all, about the beauty of nature, the nature of beauty, the importance of family, diversity, living in the light and the instinct to change patterns that keep us in the dark. And to this end, Mother Nature’s evolutionary forces are inevitable. I will be returning to the cinema before long to take in another dose of ‘The Croods’.