Two Titan concerts at Elder Hall on the weekend were the culmination of the first collaboration between the Adelaide Youth Orchestra (AdYO) and the Adelaide University’s Elder Conservatorium Symphony Orchestra (ECSO).

The towering backdrop provided by the organ pipes at the rear of the historic hall’s stage set the scene perfectly for what proved to be an impressive musical extravaganza.

The ECSO opened the concert with Schubert’s Overture to Rosamunde, D. 797, and from the first stirring note the audience was transported on a journey of sound, from light tiptoeing steps to dramatic full strides.

Conductor Keith Crellin guided the performance with understated fluidity. The precise tempo maintained by the orchestra was awe-inspiring and served to highlight their passion and vitality, which was brought to life through synergistic mastery.

Next, 20-year-old Samantha Webber, a graduate of Marryatville High School and principal clarinet with both orchestras, delighted the audience with her obvious dedication and proficiency in a debut solo performance of Weber’s Clarinet Concertino Op. 26.

After interval, the ECSO was joined by members of the Adelaide Youth Orchestra. With a total of 117 musicians on stage, they collectively delivered a seamless rendition of Mahler’s Symphony No 1, Titan, with all the texture and incremental vitality inherent in this engaging masterpiece.

The inaugural amalgamation of these two multi-talented groups filled Elder Hall with passion, ensuring an evening of rich diversity to soothe the heart and nourish the soul. 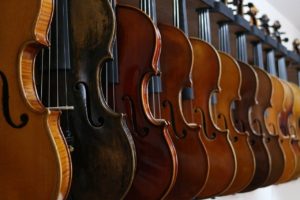